has concluded that processed meat is carcinogenic to human and stated that it is a major contributor to colorectal cancer. 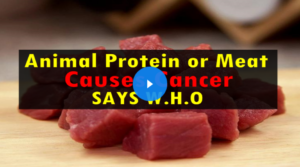 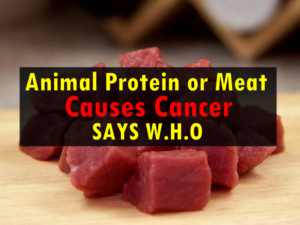 According to the World Cancer Research Fund and the American Institute for Cancer Research…
There is strong evidence that consuming red meat and process meat increases the risk of Colorectal Cancer. 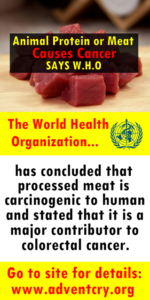 Other studies published by the National Institutes of Health…
found that colorectal cancer is not the only risk from consuming red and processed meat, but eating 50 grams of processed meat daily, put you at risk of developing prostate cancer, pancreatic cancer and eating 20 grams of meat increases breast cancer in women. That is less than half the size of a regular hot dog.

Here are a few quotes from her books written over a hundred years ago.

The first quote is taken from the book {Healthful Living, page 100.7}
She says “Cancers, tumors, and various other inflammatory diseases are largely caused by meat eating. From the light which God has given me, the prevalence of cancers and tumors is largely due to gross living on dead flesh.’  {Health Living 100.7}

This other quote is taken from a periodical called {Bible Training School, August 1, 1907 par. 2}  under the topic “Healthful Diet”
She says:”The meat diet is the serious question. Shall human beings live on the flesh of dead animals? The answer, from the light that God has given is, No; decidedly no. Health reform institutions should educate on this question. Physicians who claim to understand the human organism ought not to encourage their patients to subsist on the flesh of dead animals. They should point out the increase of disease in the animal kingdom. The testimony of examiners is that very few animals are free from disease, and that the practice of eating largely of flesh is contracting diseases of all kinds,–cancers, tumors, scrofula and tuberculosis, and etc. If man will subsist on the food that God has so abundantly provided without having it first pass into the animal organism and become sinew and muscle, and then take it second hand by eating of the corpse, his health would be much better preserved.”  {Bible Training School, August 1, 1907 par. 2}

She also stated in this other book known as {Counsel on Diet and Foods 388.4}
that “Those who use flesh foods little know what they are eating. Often if they could see the animals when living and know the quality of the meat they eat, they would turn from it with loathing. People are continually eating flesh that is filled with tuberculosis and cancerous germs. Tuberculosis, cancer, and other fatal diseases are thus communicated.”

So there you have it, even before these modern researches came about, this Prophetess of God solidly pointed out that meat eating causes cancer of all kinds.